I'd keep you in suspense about today's post, but I'm too excited to share great info, a book giveaway and the author, April Henry, with you.

I picked up April's book, GIRL STOLEN, without knowing it would be filled with so much suspense that I'd ignore everything else to find out what happened next. 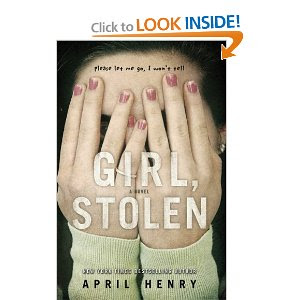 Cheyenne is sick and waiting under a comforter in the backseat of her stepmother's car. While her stepmother runs into the pharmacy to pick up medicine for Cheyenne, someone STEALS THE CAR, unintentionally kidnapping Cheyenne. Finding a way to escape is almost impossible because Cheyenne is BLIND! The stakes in this novel are continually raised. (To win an autographed, advance reader copy of this suspenseful YA novel, scroll to the bottom of this post.) 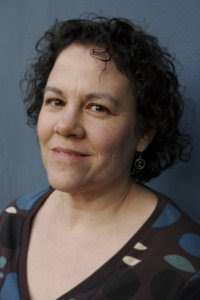 New York Times bestselling author, April Henry, has written 10 mysteries and thrillers for adults and young adults, including Girl, Stolen, which has just been selected for the Best Fiction for Young Adults List and Quick Pick List. April 2011, look for her next adult book, Heart of Ice. A new YA thriller, The Night She Disappeared, is due out January 2012. April lives with her husband and daughter in Portland, Oregon. You can visit her on the web at www.aprilhenrymysteries.com.

6-1/2 WAYS TO CREATE SUSPENSE IN FICTION

1. Give your characters phobias or fears - and then make them face those fears. Afraid of heights? The final confrontation should take place on a rooftop. Afraid of repeating the same mistake? Give them the opportunity to get it right.

2. Play on universal fears: darkness, wild storms, something crawling on the skin, objects that cover other objects, being alone, being helpless or unable to act, something under the bed, closed or partially opened doors, hallways or tunnels leading to the unknown, cramped spaces, basements, attics, heights, crowds, disease, end times, death.

3. End each chapter with an unresolved issue. Have a character open a door or answer the phone, be confronted by someone with a gun, receive a mysterious letter, or make a decision not revealed immediately to the reader.

4. Look for passages that describe the weather, the landscape, the aftermath, meals or coffee, or travel. Then cut them.

5. Hurt a main character. Do it early so the reader knows no one is off limits. Even better, kill somebody off – preferably a likable character. Readers will be on the edge of their seats, knowing that anything at all - even something very bad - could happen.

6. Force the character to make a choice between two things she wants—or the lesser of two evils. Two loves. Two people to save (when only one can be). Addict/temptation. Married/temptation. Knows brother is murderer who won’t stop killing/but if she turns him in, he’ll go to death row.

6-1/2. Write scenes that personally make your palms sweat. Don’t stack the odds in your character's favor. Multiply the bad things he faces - and see what he does in response.

For a chance to win an autographed, advance reader's copy of GIRL, STOLEN, click on the follow button on the right side of the page, then leave a comment below. A winner will be announced on this blog Thursday, March 10th. (Check back to see if you've won.)

Thank you APRIL HENRY for sharing your excellent 6-1/2 tips for creating suspense and for generously giving away a signed copy of GIRL, STOLEN!
Posted by Wild About Words at 8:55 AM

Great list! It'll be a great help as I work on my current project!

Wow! What a great post! I'm on the edge of my seat just reading this terrific list! Thank you, Donna! Thank you, April!

Good post. Nice reminder as I'm trying to wrap up my suspense novel that's feeling more like a mystery and not a suspense.

Love this article. Thanks for the fabulous ideas. My WIP will improve dramatically with these tips.

I almost didn't leave a comment. The suspense of waiting to hear if I won Girl Stolen is killing me. Love #5 rarely used, but very powerful.

I love the part about killing off characters so the readers know no one is safe. Thanks for the tip!

Those are great! Very helpful.

Great list. Great delivery. Thank you for those helpful words.

Wow what a fantastic list! Thanks for posting this. It's very helpful :D

Super suspense tips! Thanks for sharing.

Thanks so much for sharing, April. These are fantastic ideas. Looking forward to reading your new book.

With Thursday a long four days away, the characters in my head fight for a spot on my page. Who will survive and who will vanish into unconsciousness is up to me, but at least now, the last characters standing will be spiced up by these delightful tips! As I read, I immediately came up with a few ideas to incorporate some of them. And because one of my greatest writer-fears is to actually START THE PROJECT, I'm off to face my phobia!

Good post! Going to have to go back and give my protagonist a phobia - I know the perfect one!

The CRITTER Project and Naked Without A Pen

Oh my gosh--the advice alone put me on the edge of my seat! Great stuff!