Poetry, Prizes and a PURRfect 6-1/2 List from Author Lee Wardlaw

Acclaimed author, Lee Wardlaw, has not only created a PURRfect post to celebrate National Poetry Month, she's also offered the most unusual item I've ever given away on my blog. (Scroll down to enter contest.)

There is only you, scratching under my chin,

The best haiku poems emerge from a right-this-minute experience. Use present tense to heighten immediacy – especially if writing from memory. Avoid creating haiku out of your imagination; they will lack authenticity.

2. When poised at a hole, remain still – and use your ears, eyes, nose, whiskers and mouth to detect a lurking gopher.

Observation is crucial to good haiku. Quiet your mind and use all five (or more!) senses to absorb the moment.

Your haiku should capture a moment in time, revealing a surprise or evoking an ‘a-ha!’ or ‘ahh’. This pounce helps the reader awaken; to experience the ordinary in an extraordinary way.

Traditional Japanese haiku features a total of seventeen beats: five in the first line, seven in the second, five again in the third. The 5-7-5 rule does not apply to American haiku because 17 English phonetic syllables conveys way more information than needed – and can sound awkward or forced. So don’t worry if your haiku turns out 2-3-2 or 5-6-4. What’s more important is the essence of your chosen moment.

Traditional haiku features themes of nature. Try to use a kigo (season) word to hint at the weather or time of year.

6. What part of ‘meow’ don’t you understand?

If you tease a cat, it won’t bother to meow – it will bite or scratch. It shows its annoyance

rather than tells. Your haiku should not

explain; instead, it will illustrate a meaning

or feeling through a vivid image.

6 1/2. When in doubt, nap. Take time to revise and hone your haiku. If you grow weary, well, there’s always that comfy looking couch… 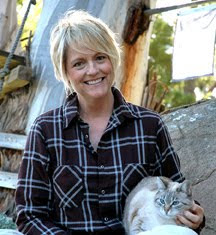 Lee Wardlaw claims her first spoken word was ‘kitty’. Since then, she's shared her life with more than two-dozen cats and published more than two-dozen, award-winning books for young readers, including 101 Ways to Bug Your Parents (Sidenote: Our oldest son loved this novel so much that he read it at least a dozen times!), 101 Ways to Bug Your Teacher, Punia and the King of Sharks, Saturday Night Jamboree and Seventh-Grade Weirdo.

Her newest book, Won Ton: A Cat Tale Told in Haiku (Holt), illustrated by Eugene Yelchin, tells the story of a wary shelter cat and the boy who adopts him. Won Ton has received starred reviews from Booklist, School Library Journal and Kirkus, and was praised by the Wall Street Journal, Chicago Tribune, and the Washington Post. Publisher’s Weekly called it “…a surprisingly powerful story in verse.” (To win an autographed copy of Won Ton and a special kitty surprise, scroll down.) Lee received her B.A. in Education from Cal Poly, SLO, and taught for five years before choosing to write full-time. She recently graduated from the Montessori Institute of San Diego with an AMI Primary diploma, and will earn her M.Ed. from Loyola University, Maryland, in 2012. Lee has 30+ years experience working with children of all ages; her schools visits, presentations and workshops are lively, interactive and popular with students, teachers, librarians, parents and writers.

To learn more about Lee and her books, visit: http://www.leewardlaw.com

Enter to win an autographed copy of Won Ton: A Cat Tale Told in Haiku and a catnip mousie by clicking the "follow" link to the right and leaving a comment below. A winner will be chosen at random Friday, April 29th. Good luck!

Thanks, Lee, for helping us celebrate National Poetry Month with your words of wisdom about writing haiku and for your fun prize offerings!

Posted by Wild About Words at 2:37 PM

Would love this book for my daughter who's first words really were El Gato ( the cat, in spanish).What a great graduation present it could be!
Jennifer Dunnington

What great advice! Thank you Lee and Donna. I enjoy Haiku and adore cats,so this was a purrfect post!

Love catslove poetry. Gotta check out her other books too. ThNks donna

I'll love the book. My 3 kitties will love the catnip. That was certainly a lovely post.

Great writing advice; I'm going to pass it on to my former colleagues (teachers). Can't wait to read Won Ton! Got my fingers crossed on winning the autographed copy!!!
Thanks for the great "interview."

Love these writing tips! We have many students who adore their cats and this will be a perfect way in for them. Thank you :-)