Austin Towle is 13. He's an 8th grader at a middle school in Florida. He likes to play X-box, especially Call of Duty and has a sister, Sydney, who's about to turn 11.

When Austin's mom contacted me about her son writing a guest post on my blog, I thought it would be great to hear what he had to say. 13-year-olds don't always get a voice. I suggested he write about what he'd like authors of books for children and young adults to know.

But Austin did more than that. He wrote with honesty and wisdom about what every parent, every person who works with kids should know. And he did it eloquently. 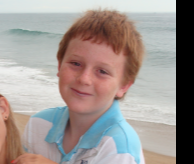 1. We don't like to be compared to other kids. When you compare us to little Timothy down the block saying how smart and well-mannered he is, it doesn't make us feel good. We like to be appreciated and complimented on our abilities. It may not seem like it but being complimented is one of the best things you can say to us.

2. We have our own sense of humor. You may hear us cracking up about something that doesn't even make any sense to you and you're racking your brain trying to figure out why it's so funny. But don't bother, we have our own sense of humor that sometimes doesn't make any sense. For example, I was with my friend, Pedro, and we started laughing and his mom asked us what was so funny and we explained it to her but she didn't have the slightest idea why it was funny.

3. One of the most important things, don't try to act our age. We don't think you're "hip" when you're saying cool, rad, or dude in every sentence. Just act your own age. We'd rather you ask us if we want to play "stickball" then you asking us if we want to go hit up the clubs. Another example, one of my mom's friends was with me and asked if I wanted to go shred down at the skate park. That is a prime example of overdoing it on the whole "be your child's friend kind of thing".

4. We don't want a lecture as a response to a yes or no question. You don't have to yell at us for five minutes about how bad or wrong that is, just say no. Oh and another thing, I'm pretty sure none of my friends would jump off a bridge and even if they did I wouldn't. So the next time one of us goes up to you and asks a question, just say yes or no.

5. Bullying is more of a problem than any adults can even fathom. The media blames schools or the parents, saying that bullying is a minor problem that is rising, Guess what? it's actually been a huge problem for a while. The problem is that most of the victims are afraid to speak up. Bullying occurs between everyone and happens everywhere. Guys bullying guys, girls bullying girls, guys bullying girls, and even girls bullying guys. Another thing, telling the principal and calling up the bully for confrontation is probably the worst idea ever. If you snitch, it will more than likely get remarkably worse. Trust me, bullies don't learn their lesson. They will keep at it until either you fight back or they are expelled.

6. Let us have our personal space. If we want to be alone, then let us be, it's not like we're plotting world destruction. I know some adults worry about their kids falling in with the wrong crowd or getting into bad habits, but you just got to have faith in us and have confidence in how you raised us. You raised us better than that.

6-1/2. It may seem like we don't want to be hugged or loved, but inside we do. We're just trying to act tough and grown up, but we always could go for a big ole' hug.

Posted by Wild About Words at 2:09 PM

Thanks for your perspective, Austin! Good to know.

I am not saying that I'm guilty of any of the things mentioned but ... thanks for the tips! Great post!

Love, love, love your list, Austin! My kids are still little, but it's something to keep in mind as they age. Now, my nephew, on the other hand....

These are all excellent tips, but I'm especially interested in #5, the one about bullies. I've been thinking about this a lot lately. Austin, maybe you've seen some of the "It Gets Better" videos that tell victims of bullying to hold on because once they grow up, things will get better. It really bothers me that anybody should have to wait until they grow up for things to improve, I wish there was a way to work on the problem right away without having to wait. Do you truly believe there is no way to make a bully change their behavior? You are there "in the trenches" and you know what's likely to work better than we adults do. Can you imagine any scenario that would make things better for victims of bullying, other than graduating and never seeing those bullies again? Thanks for your opinions, Austin.

Well, done, Austin! Thank you for your thoughtful, well-written post. I think you'll make a lot of people (especially parents) stop and think a little bit. I know I certainly did after reading what you wrote!

Heidi... Well there are SOME ways to get away from the bullies and to make them leave you alone, but they might not always work. FIrst of all, there is always the run and hide option, when you see the bully you run away and hide somewhere, but eventually they will get you. A better way is to hang around teachers or other administrative figures, the bully wouldn't dare go near you if you're with Mrs. Johnson all the time, unless they're crazy. Another one that is kind of a work good or fail miserably is the "if you can't beat 'em, join 'em". Try to find common ground with the beef head, see what he likes and tell him you like the same things. Again, if it doesn't work then you're back to square one. Truthfully Heidi, there really aren't any easy ways to get rid of the bullies, but you can try some of these ideas.

Thanks for the great insights, Austin!

Thank you, Austin. And thanks, Donna for giving Austin the space.
Jean

Austin, you have wisdom beyond your years and I loved your viewpoint on bullying. I am old enough to be your grandmother and I was bullied. I agree with you. The media has gone wild with bullying and until adults actually pay more attention to who the bullies are and expel them faster it isn't going to stop.

Oh yeah and on the humor thing, I completely agree. We adults do that to kids too. We laugh at stuff they don't think is funny. :)

Austin, thanks for how you view life. I'm writing an urban fantasy, THE LEGEND OF VICTOR STANDISH. Victor is 13 just like you -- except he's lived the past six years on the streets, surviving as best he could.

Your way of looking at life will help me keep Victor real. Thanks, again! Roland

Loved your words of wisdom, Austin, and best of luck with the bullies. I hope you'll be a guest blogger again soon.

Thanks, everyone, for your wonderful comments. And thanks again Austin for sharing your wisdom!

This is awesome! Great stuff for writers, and parents, to remember.

I have a 13-year-old son who also loves Call of Duty. Austin, he just got Black Ops. Are you playing that one yet?

Thanks, Austin - nicely said. I will be able to use what you've written in my storytelling efforts.