Last week, I had the great pleasure of hearing author Ruta Sepetys give a talk at Books & Books.

Hubby and I drove two hours through rush hour traffic on a weeknight to be there.

A little more than a year ago, Steve Watkins, Julia Durango and I judged the Golden Kite Awards.  We read through 450 books . . . 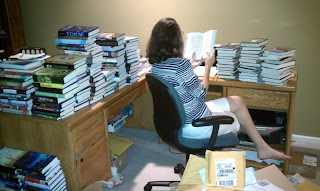 And ultimately chose Ruta's Between Shades of Gray as the winner of the Golden Kite Award. 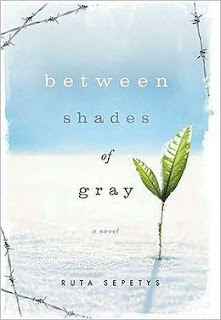 Not to be confused with that masterpiece of literature, Fifty Shades of Gray.  Even though Ruta's book does start with:  They took me in my nightgown.

Here's a blurb about the book:  Fifteen-year-old Lina Vilkas is arrested by the Soviet secret police and deported to Siberia with her mother and younger brother. Lina fights for her life, vowing that if she survives she will honor her family and the thousands like hers by burying her complete story in a jar on Lithuanian soil. Lina’s writings chronicle her experience, her struggle to accept help from a kind Soviet guard she’s supposed to hate, and retain her dignity without losing faith in mankind.

Between Shades of Gray has been published in 41 countries.

So, when Ruta's follow up, Out of the Easy, came out, I had to get it. 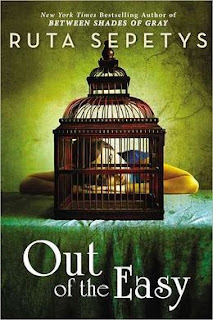 And when I found out Ruta would be at Books & Books at the beginning of her 10-week tour, I had to get there.

She was worth the trip!

Ruta gave the best author/book talk I've heard at a bookstore.  Her stories were fascinating, funny and harrowing.  They involved American idol, being in a prison camp and spending a day with a mafia boss.  Her personality is warm and genuine.  And she stayed until every last question was answered and every book signed.

I'm an even bigger fan now!

Ruta's tour will take her to many places in the United States, London, Paris, several locations in Lithuania and she will be speaking to the European Parliament!

Here's her touring schedule.  If you get a chance to see Ruta speak, don't miss it!
Posted by Wild About Words at 5:06 PM 4 comments:

One of the joys of my work is the creative response from kids.

1)  This web site for How to Survive Middle School was created, I assume, by a student:  http://htsms.weebly.com/index.html.  To say I was impressed by the effort would be an understatement.

Here are some of the things kids have said about the Battle of the Books in Chicago:

"We all felt so excited that we almost fainted!"

"All the books I read helped me understand more about the world."

3)  And the extraordinary educator, Deb Tyo from Ohio, sent me this video invitation created entirely by her 6th grade students.


What do you think?  Should I Skype with these kids on WRAD?  You betcha!  And I think I'd better bring my hula hoop, too.
Posted by Wild About Words at 3:10 PM No comments:


. . . told me about canoeing recently through Riverbend Park and coming face to face with a wide-mouthed, hissing alligator and accidentally paddling the wrong way -- closer to the alligator's open jaws -- I wasn't scared.

So I did what any normal person would.  I joined Kim for a kayak adventure through those same waters.


Isn't it gorgeous?  The way Florida used to be before we paved paradise and put up a parking lot.  Or, in our case, filled in the swamps and put up gated housing communities, shopping malls and several rodent-inspired amusement parks.

It's such a treat to get out in the wilderness, get an upper body workout and enjoy nature.


There was also this little fellow . . .


We saw hawks and turtles, both large and tiny, spiders and then we saw this . . .

Well, we fooled them because we weren't canoeing.  We were kayaking.  Entirely different.  Right?


Fortunately, he stayed put and we didn't.  "Paddle faster, Kim!"

(Notice it's not a closeup.  I have smart friends.)

Thanks to Kim for shlepping her kayaks to Riverbend Park for our morning adventure.  And to her hubby, Brian, for lending me his kayak.  And to the powers that be that let this part of South Florida be.

Beautiful.
Posted by Wild About Words at 7:54 PM 4 comments: