Thanks for sharing your good news on this blog post.
As promised, I used a random number generator to choose one commenter to receive a signed copy of How to Survive Middle School to donate to a school, library or organization of his choice.
Why did I use the pronoun his in that last sentence?
Because the winner is David LaRochelle!!!
What a coincidence; David has provided the most amazing guest blog post for tomorrow -- Halloween. Wait till you see what he has to share with us!
Thanks David and everyone who shared good news. It was great fun to read everyone's wonderful comments.
Posted by Wild About Words at 11:29 AM 1 comment:

Have you heard from an agent? Sold a book? A magazine article? Has your child actually remembered to hang up her wet towel?

Whatever your good news . . . it's time to shout it from the rooftops or, in this case, the blogtops!

Post your good news in the comment section below. Let's read and celebrate each other's good news.

On October 30th, one comment will be selected at random, and that person will receive an autographed copy of HOW TO SURVIVE MIDDLE SCHOOL . . . to donate to the school, library or organization of his or her choice.

1. If you know of a library that can use a HUGE collection of children's books or YOU would like to donate a new middle grade book, take a gander at this amazing post from the wonderful folks at From the Mixed Up Files.
2. The fine, funny, thoughtful Libba Bray posted a long letter to a young reader who has big dreams, but struggles because her father has different ideas about her future. Libba's response to this young women put so many things into perspective, including understanding our place in this mixed up world. Libba's wise words can benefit ALL of us. Read the teen's letter and Libba's brilliant response HERE.
3. And now for a few funtastic photos from my Skype visit with some very cool students from Maryland. 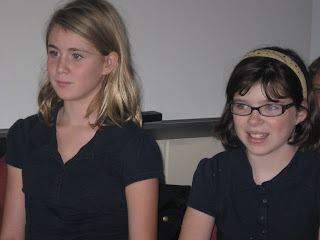 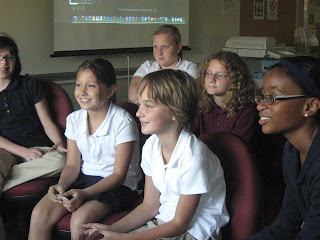 Thanks a bazillion to Ms. Etchison for coordinating the visit!!!
Posted by Wild About Words at 9:35 PM No comments:

Labels: From the Mixed Up Files, Libba Bray, Skype Visit

Sometimes, a young reader responds to one of my books in a delightfully creative way.
Some have baked cakes, others have made a YouTube video and still others have made posters or T-shirts.
But only one person (that I know of) has ever sculpted characters from my novels out of clay.
Elyssa, my friend's daughter and an avid reader, sculpted Hammy the Hamster from How to Survive Middle School. And when I visiting Pennsylvania, she gave it to me.
This clay hamster was so detailed. It had a pink nose, puffy cheeks and a microphone.
But there was one problem.
Hammy had to travel on a plane all the way back to Florida. How to do that? Well, I stuck him in a days-of-the-week pill holder, of course. Hammy resided in the Thursday slot during the ride.
When I got home, I discovered, to my great horror, that something terrible happened to Hammy.
His. Arm. Fell. Off. THE ONE WITH THE MICROPHONE!
I screamed bloody murder. I dialed 1-1-9. (I'm dyslexic.) I ran for the Krazy Glue. 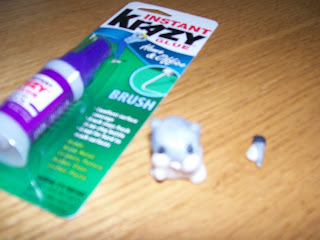 After countless minutes -- two -- Hammy was back together again. 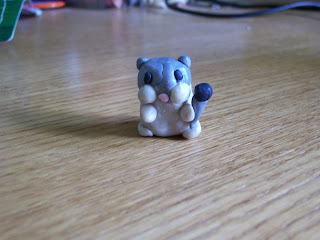 In fact, he already made a new friend. 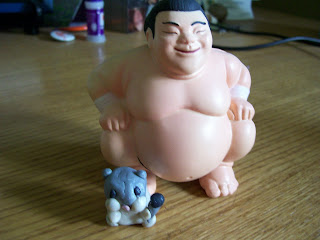 I should have known this would have happened. Elyssa knows there have been mishaps in the past when it comes to Sculpey clay. Seniorita Meltypants was our previous disaster.
But all is right in the world now. And little Hammy keeps me company next to Miss Vanessa Meltypants on my desk.
Thank goodness Hammy and his microphone are back in working order. I mean, how else could he possibly star in his very own video? Thanks, Elyssa!
Posted by Wild About Words at 6:13 PM 4 comments:

Labels: Hammy the Hamster, How to Survive Middle School, YouTube

1. Did you catch J. K. Rowling's interview on Oprah? So inspiring. Her life was far from easy. She dealt with poverty, grief and clinical depression and still wrote, wrote, wrote. Maybe that's why she wrote, wrote, wrote. And she referred to Arthur Levine as one of her best friends. He's the editor who brought her work to America, and he's such a cool guy that he once dyed his beard PINK when his author, Laini Taylor, was nominated for a National Book Award.
See . . . 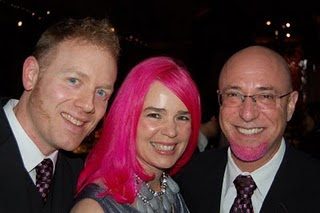 (Jim Di Bartolo, Laini Taylor, Arthur A. Levine)
Back to J.K. Rowling. Here's the link with info about her interview with Oprah.
And here's a video of her commencement speech at Harvard. It's so inspiring. She talks about the value of failure. Got to love that!

2. The amazing author and all-around cool person, Mary Hershey, had a wonderful list on her blog, that had me saying, "Yup, me too" and "That's so true." Here's a link to the list. (Did I mention it's funny?)
3. When we write, we hope to make a difference to one reader. Just one. And we feel the same when we speak to a group.
Last Saturday, I had the great pleasure of speaking to a group of adults about something I've been doing for the past 18 years -- parenting!
Today, I received an e-mail from one of the parents in the audience. Here's a bit from that LOVELY e-mail:
"I am working on a children's book and have never finished it just because, well, if I finish it.... then what? I have a book on my computer, period. I have this delusion that I need to "know people" and "have connections" everyday homemaker moms - except for J.K. Rowling of course, don't get published. So I've never finish it. But . . . you showed me that my thinking is backward. I should be thinking "even J.K. Rowling did it, and so can I!"
I have restarted my work."

Now I know that what I said mattered to at least one person. Thank you, Jill, for letting me know you've chosen to "dust off your dreams."
And thank you, J.K. Rowling for reminding us that "dusting off our dreams" can not only save our lives, but can deeply enrich them.
Posted by Wild About Words at 3:52 PM 1 comment:

TOP 6-1/2 THINGS TO DO WHILE WAITING TO HEAR BACK FROM AGENTS AND EDITORS BY PAUL MAY
Several years ago, at a FL SCBWI conference, my dear friend Janeen Mason introduced me to some new guy, who had recently moved to FL.
That "new guy" turned out to be Paul May -- funny, touching writer, techie wizard, nature photographer, family camping buddy, awesome dad to his fabulous daughters, wonderful hubby to Kathie and all around great guy! 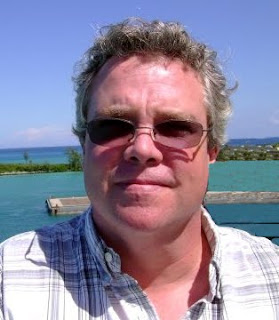 Paul R. May (website: http://www.paulrmay.com, blog: http://paulrmay.blogspot.com) writes young adult and middle grade novels, freelance magazine and newspaper articles, parenting articles, and essays about raising kids. Paul's award-winning writing has been published in anthologies, national and international magazines, online parenting sites, educational publications, and e-zines. He has also written dozens of feature articles for several Florida newspapers. Paul lives in St. Augustine, Florida with his wife and two daughters. He loves stomping around in the Florida swamps and photographing wildlife.
And now, here are Paul's 6-1/2 Things to Do While Waiting to Hear Back from Agents and Editors . . .

6 ½. If none of the above really works out for you, consider leaving all that submission stuff alone once it’s out there. Start a new writing project. Pour all that manic-crazy-waiting energy into new scenes and wonderful characters. Laugh about your frustrations with other writers in the trenches. Have a new manuscript well underway when you finally get some good news!

Amen!
Thanks, Paul, for sharing your wit and wisdom!
Posted by Wild About Words at 12:32 PM 4 comments:

Saturday, I had the great pleasure of being the keynote speaker at the Mapping the Middle: A Parent's Guide to All Things Tween event in Martin County, FL. 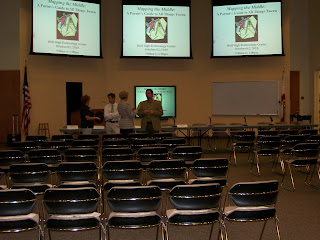 What a terrific event!

After the keynote -- 6-1/2 WAYS TO SURVIVE PARENTING A MIDDLE SCHOOLER -- I moderated a panel of experts, including a group of savvy, sincere teens . . . 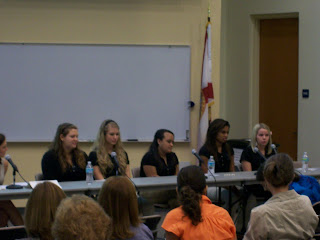 There were workshops about brain development, substance abuse, bullying and connecting and communicating with positive behavior.

They had vendors, like the amazing Jenn Salas from the Blake Library in Stuart, whom I met when she invited me to participate in their first Kidsmania event. 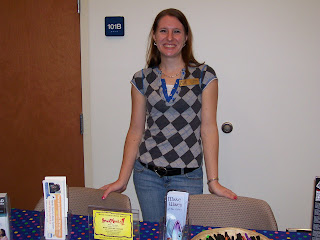 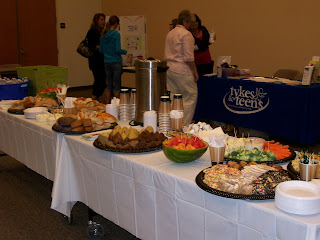 Hubby helped during the entire event -- selling books, providing support and most important, making sure I had an ample supply of garlic bagels slathered with cream cheese. 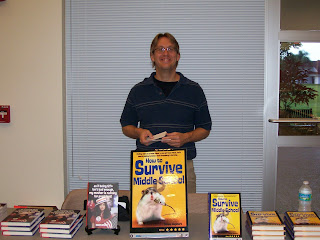 My favorite part was after I finished speaking and people came up and shared such meaningful bits of their lives. Thank you.

And thank you to Darcy, Jeff, Tykes and Teens, the Parent Action Committee and everyone who worked so hard to put together such a wonderful event for parents in the community!
Posted by Wild About Words at 7:48 AM No comments:

First School Visit . . . with a Twist

Yesterday, I had the great pleasure of speaking to the 6th grade students at Independence Middle School -- my first school visit of the year. 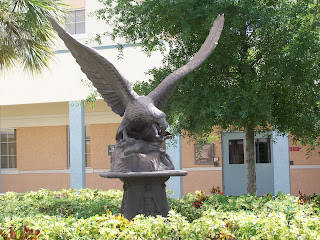 Go, Eagles!
This is what the cafetorium looked like before 400 students and teachers streamed in . . . 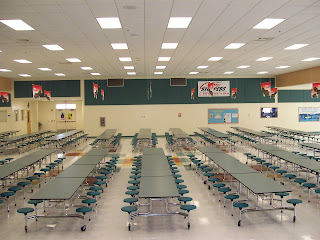 What a great group of kids! After listening to my talk, "6-1/2 Ways to Survive and Thrive in Middle School," they all turned to our son, Jake, who was sitting in the back row. And because it was his 16th birthday, 400 exuberant voices sang "Happy Birthday." It was a blast!
That evening, the amazing Lisa Petroccia, media specialist (and a character in my novel), arranged for me to sign books at Barnes and Noble in conjunction with the school's book fair.
It was wonderful. The choir sang, students played clarinet, teachers arrived as did the principal, Ms. Bonino (also a character in my novel). And lots of friends stopped by, too. (Hey, Deborah!)
The best part was having a chance to chat with the kids while I signed books. And they got to meet Hammy the Hamster and shake his paw. (Hammy is a stuffed toy.) It was a fabulous event!
Then my favorite guys in the whole world came to pick me up. 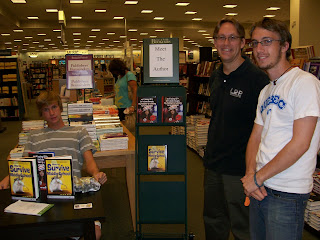 (Jake, pretending to be me, Dan and Andrew)
We took Jake out for a late celebratory dinner at the Melting Pot. I mean, you only turn 16 once. And what better way to celebrate than with 400 6th graders singing to you, um, I mean with a plate of desserts to dip into warm chocolate? 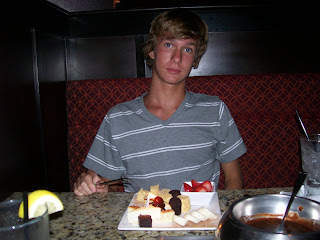 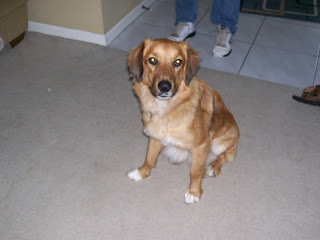 Benji (aka Butthead)
Posted by Wild About Words at 1:18 PM 4 comments: