Especially book birthdays. Especially this book's birthday because How to Survive Middle School has had a year I couldn't have imagined. 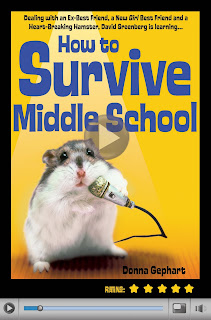 Let's begin at the beginning.

After As If Being 12-3/4 Isn't Bad Enough, My Mother Is Running for President came out, I wrote another book. It took a year of research and writing, involved multiple viewpoints and was 400 pages looooooooong.

My agent, Tina Wexler, was savvy enough to tell me those 400 pages were terrible. Actually, she was kind enough to say, "I think you should put this one away and write another book."

She was right, of course.

But there was no way I could write another book just then. My heart was in a chokehold. Our youngest son had just started middle school. One of 1,200 kids, he suffered mightily. He hated himself and got into all manner of trouble. I remembered that our older son had similar heart-breaking episodes at that age. In fact, I remembered when I suffered the humiliations of acne, unrequited love and discomfort in one's own skin during those awkward years.

I could write about those feelings, I thought. Maybe a character could write a book about how to survive middle school. Or better yet, create funny videos that end up on YouTube.

I infused those intense feelings into a book I titled: How to Survive Middle School Without Getting Your Head Flushed, Deal with an Ex-best Friend, um, Girls and a Heart-breaking Hamster. Thank goodness my publisher shortened the title!

My editor told me this territory has been covered before, so I'd better work hard to make my book different. I worked hard. She sent me several rounds of revisions until I got it right.

Similarly, when I got the e-mail telling me that my book landed on the Texas Lone Star Reading List, I was shocked. I'd never appeared on a state reading list. Last week, I found out How to Survive Middle School will be on the New York state reading list, too. Then came inclusion on the Bank Street Children's Books best books of the year list.

I'd been invited to speak at schools and literary events all over the country, like the BK Book Festival, coordinated by the awesome Arthur Levine. (Check out his new picture book, Monday is One Day.) 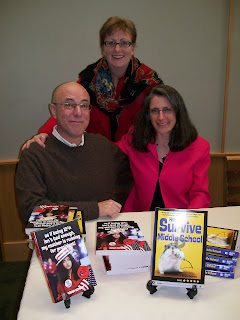 I learned that Scholastic bought the right to include my book in its fall book fairs and book club. And How to Survive Middle School will be featured in their author video that students across the country view before attending their school's book fair.

I received e-mails from children and adults that have made my day, week, month! Lily sent me a photo of the Jewish apple cake she and her mother made from the recipe in the back of my book. 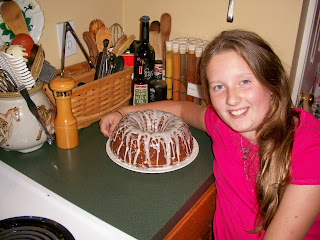 When one sends a book into the world, one never knows what will happen. Usually what happens is a big pile of nothing.

So I'm delighted about all the wonderful that's happened in the first year of How to Survive Middle School. I'm glad most of all that it's made a difference to some young readers, that they learned they weren't alone in their feelings and struggles to survive those turbulent middle school years. I'm happy some young people learned that things get better.

Things certainly got better for our son. And the cool thing about all this is that some of the money I earn from this book will go to paying tuition for him to attend a phenomenal private high school in our area next year.

And I'm thrilled to announce that on my book's birthday -- April 13th -- How to Survive Middle School will go into its 6th printing.

So, happy birthday book. Thank you for bringing so much joy into my life. And don't forget that next year you'll have a sibling -- Olivia Bean, Trivia Queen will come into the world early in 2012. I hope she receives a reception half as lovely as you've had.

I'd have posted this on my book's actual birthday, but next week I'll be in PA, speaking at this conference then visiting family and friends.

When I return, I'll share photos from my adventures.

And to celebrate National Poetry Month, talented author, Lee Wardlaw, will offer an inspiring guest post about writing poetry.
Posted by Wild About Words at 1:45 PM

Congrats, Donna, son, and the success of an awesomely funny and touching book! What a feeling it must be!!

Jennifer,
Thanks so much. That was really sweet!

I saw the announcement of your good news on the SCBWI-FL listserve and came over to your blog to read all about it. Congratulations about ten times over! HOW TO SURVIVE is a terrific book and I'm thrilled for you that it's getting so much recognition. Can't wait to read your new book!